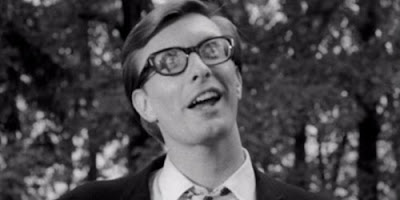 Long story short, I've been asked to play Assistant Director for a stage adaptation of Night of the Living Dead.  I'm really excited about this!  I've worked with the BRCC Drama Club before, they're an incredibly talented group of people, and I'm confident that this is gonna be one hell of a Halloween show.  Last night, the Director hosted a screening of George Romero's original film, invited anyone interested in participating to come out and talk about our plans for the play.  She asked me to give a brief introduction, maybe speak about the historical significance and subtext.
So I did.
I thought my readers might enjoy hearing what I had to say, since you couldn't be there.
So here you go.
Enjoy.
***

First off, I should probably take a moment to tell you about myself, because I don’t blame any of you for thinking, “Who the hell is this guy and why should we care what he has to say?  Bring on the zombies!”

I’ve loved this stuff since before I could READ.  My parents saw Night of the Living Dead at the drive-in on one of their very first dates, I’m told, and maybe that had something to do with my infatuation with the horror genre.  According to an old urban legend, the Elephant Man’s mother was startled by a pissed-off elephant in a parade a few months before he was born . . . so there’s a weird sort of logic to my theory, I suppose.  All joking aside, I’m not only a big fat fanboy, I’ve published a number of scary stories and novels as well.  I wrote a book called 666 Hair-Raising Horror Movie Trivia Questions, so I guess I know a little about horror films.  I co-wrote a novel a few years ago called Night of the LOVING Dead.  It’s demented.  Exactly what you think it is.  The only story I’ve ever written that I won’t let my mama read, put it that way.

Anyway, pull me aside later if you wanna know more, and I’ll gladly try to sell you a book.  Enough about me.

These days, zombies are EVERYWHERE, a part of pop culture as much as Doctor Who, Candy Crush, and Donald Trump’s hair.  It’s hard to imagine a world without them.  Before 1968, however, the only zombies on film were those of the traditional Haitian variety; essentially nothing more than slack-jawed sleepwalkers, they mostly just staggered around and did their master’s bidding because of some old voodoo curse.  Keep in mind, this was nearly a HALF-CENTURY before The Walking Dead was the #1 show in America . . . before teenagers spent all their free time machine-gunning undead Nazis in the latest violent video game . . . back when you could walk into bookstores without seeing titles like Zen and the Art of Zombie-Killing on the shelves.  From out of nowhere, here came this little low-budget black-and-white indie film, ushering in a new breed of movie monster.  That once-iconic image of the bug-eyed fiend stealing off with the damsel in distress had become about as threatening as a groom carrying his new bride across the threshold.  Night of the Living Dead showed audiences a world in which WE were the thing to be feared, a terrifying scenario in which our loved ones rise from the grave to feast on the flesh of the living.  Hard to believe this was five years before the sacrilege of The Exorcist, before the exploitation films of the ‘70s supplied barf-bags to movie-goers along with their popcorn and Twizzlers.  Audiences couldn’t believe what they were seeing.  Of course, there are always those who will try to take away someone else’s right to enjoy something just because they find it distasteful.  During its initial theatrical run, none other than Reader's Digest urged everyone to avoid Night of the Living Dead, suggesting that the film would inspire RAMPANT CANNIBALISM!

But, seminal horror film aside, was Night of the Living Dead more than just another gruesome drive-in feature?  Director George Romero has called his movie a metaphor for America’s collapsing social order (while at the same time insisting that he didn’t purposefully cast a black man in the lead role; Duane Jones simply gave the best audition).  Night of the Living Dead was filmed during a decade when thousands of young people were sent fresh out of high school to die in Viet Nam . . . when a good man was murdered for daring to preach his dream of equality . . . and when the age of peace, love, and flower-power perished at the hands of a hippie cult whose leader claimed to be both Christ and Satan in human form.  It is nearly impossible to watch this movie now and not think about was going on in our world at the time:  the middle-class fought to survive while those in charge pretended to have it all under control . . . only to throw the remains of everything we held sacred onto the fires of discontent.

Then again, maybe Night of the Living Dead was just a movie about corpses walkin’ around chompin’ on guts.  Romero’s co-screenwriter, John Russo, once said, “The film was an attempt to make money.”  Personally, I have a hard time NOT believing him, as Mr. Russo once charged me $20 to sign my copy of his book – something that’s unheard of among writers, as most of us are overjoyed knowing someone cared enough to buy a copy in the first place!  Russo went on to say, “A lot of the critics have likened the (zombies) to Nixon’s silent majority.  They’re full of shit.”

Maybe it was intentional, maybe it wasn’t, but you can’t help but see the subtext, and without searching too deeply for it.  It worked in 1968, and perhaps this film with its doomed black hero is just as timely now, in an era when every other week there’s another Trayvon Martin in the news, another Michael Brown, another Eric Garner, another Sandra Bland . . . .

When all is said and done, read into the movie whatever you want, as you should with any great work of art.  Or read into it nothing at all.

In my opinion, Night of the Living Dead is one of the most disturbing films in the history of horror cinema.  Is it perfect?  Nope.  Is it dated?  Sure is.  But, whether you’re watching it tonight for the first time or the three-hundred-and-first -- imagine yourself in a time when audiences had seen NOTHING like this before.  Try to forget all the zombie movies you’ve seen – the good, the bad, the remakes and the rip-offs and the countless parodies -- and ponder for the next 96 minutes:  What if something like this REALLY HAPPENED?

I am so proud to be a part of this project.  At the risk of getting on her nerves, I’d like to thank Jennifer  Treadway, once again, for inviting me on as her Assistant Director.

We’re gonna create something special here, I have no doubt.

Ladies and gentlemen . . . Night of the Living Dead.